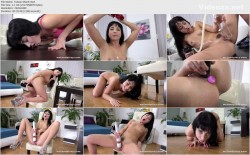 720
35:08
Description:
Taissia earned a high approval for her debut on Wet and Pissy. Now the goddess is prepped with a pair of short shorts that shows off the magnificent girth of her well praised legs. She's kept her fuzzy patch and it's been souped up while keeping it under control. Taissia starts off on a table wetting her shorts. Soon after, she strips and places her outfit in front of her to piss on it. Her table manners are top notch, and she expertly licks down the wet table. Taissia moves on to her next phase, perching herself on top of a chair. Down on her knees and bending forward, she arches her body over the chair, pissing with her ass out for full visual enjoyment. She goes a step further, pulling at her ass and wiggling around as she lets it loose. The plug remains within her for the remainder of the scene, even as she walks to pick up a goblet. Taissia fills it up and splurges it over her head and sometimes into her mouth. The last bit is swallowed down without a hint of hesitation. Taissias captivating traits don't get left behind, and she flexes that power to it's full effect from the beginning to the end.
Watch online
0 / 0
Comments (0)
Share
Get link to download Complaint
widget here
HTML link
BB link for forums
Direct link
Office Piss Play
WetandPissy