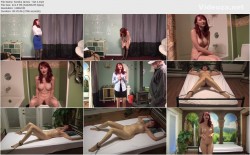 1080
45:06
Description:
1. The Sadistic Burglar Returns (19 minutes 35 seconds)
Years ago, a burglar broke into Lola Lynn's house, and when she arrived home unexpectedly needing to pee, he made her wait, strip off her clothes, and sit on the rim of the tub close to the toilet, making her wait to use it. (Search on The Sadistic Burglar or Lola if interested in the original). Now, the same man has broken into another home, and this time it's Kendra James who arrives home bursting for a piss, and the man refuses to let her go. She squirms in desperation as she pleads with him to let her relieve herself, but he refuses to let her go. When she starts fretting about wetting herself, he makes her strip off her clothes so that they don't get wet, then makes her stand there in the nude with a very full bladder. To increase her torture, he takes her to the bathroom and, as with Lola, makes her sit on the edge of the bath tub with the toilet within arm's reach, and still he won't let her pee. Kendra wiggles and rocks as she struggles to suppress the urge to jet pee everywhere. It is quite some time before the man allows her to sit on the toilet, but the only way she is allowed to pee is with her legs apart and hands out of the way so that he can watch her go. It's so humiliating, but then Kendra is so desperate by this time that she will do anything if it means she can empty her aching bladder.

2. The Lousy Lawyer (17 minutes 17 seconds)
Dave has spent two years in prison for fraud, even though he was innocent of the crime. He was put away because his defense lawyer, Kendra James, did almost nothing to help him, and he suspects that she was on the take. He has had a long time to plot his revenge. When she arrives at his house at his request, ostensibly to discuss some new case, Dave holds her up and forces her to remove her clothes. Kendra explains that she has been busy all day and needs to use the bathroom, but Dave is unwilling to let her go. Instead, when she is naked, he makes her shackle and cuff herself to a bed. Completely helpless and urgently in need of the toilet, Kendra tries to talk him round, but he really is not in any mood to listen. He leaves her there to struggle with her full bladder, and she is seriously bursting. It is not long before Kendra can no longer maintain control and pissing on the bed. Her pee pools around her butt and travels up her back, but given that she can't get up, there is nothing she can do about that. (Filmed with two cameras with cleave shots between Kendra's parted legs).

3. Naked Tale Of Desperation (8 minutes 39 seconds)
Kendra announced before she started this one that her bladder was very full, and it would of necessity have to be on the shorter side. While she stands naked and struggling not to pee, she recounts the tale of what happened to her after her shoot with us last summer. This involves a car journey with a lot of delays, a frantic run into the hotel, a distraught minute or two in an elevator. Having recounted the story, she can't hold her pee any longer and lets it go, and it goes on and on because Kendra has such a large bladder.
Watch online
4 / 0
Comments (0)
Share
Get link to download Complaint
widget here
HTML link
BB link for forums
Direct link
Battle of the Bladders
Bound2Burst